The City of Kingsport, Tennessee has been curing their sidewalks and exterior concrete projects with SCP Technology for many years. For one of their new salt sheds, the city wanted to use the entrance slab as a means to evaluate the effectiveness of various SCP Technology options against corrosive salt attack. They wanted to see what an integral use of SCP products would provide in comparison to their current P3 Protect use, compared to their past use of ASTM C309 curing. The SCP treated sections, integral and spray-treated, would be placed side-by-side with standard concrete in order to have a true comparison. 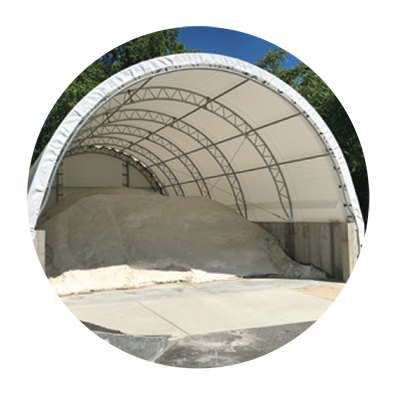 The main slab and storage walls of the salt shed were cured with P3 Protect, as is the standard for city concrete. For the evaluations, the entrance slab was divided with construction joints into four equal sections, with one load of concrete pouring two sections, each receiving different curing products, allowing for four variation panels. The same base concrete mix design was used for the entire placement. The difference in the four panels is demonstrated in the photograph below. Salt was loaded into the structure less than 60 days after construction and treatment of the storage slab and walls..

After only one season of use, and less than 9 months after construction, the difference in surface appearance is strikingly clear. As one city official put it, “Right there you can see the difference in the concrete. Whatever the tests show, that visible difference right there is the reason why we use SCP for curing our concrete. It just makes it better.”

SCP and the city continue to make regularly scheduled visits to the project to conduct both visual observations and surface resistivity readings in order to compare the long-term effects in this highly aggressive environment. 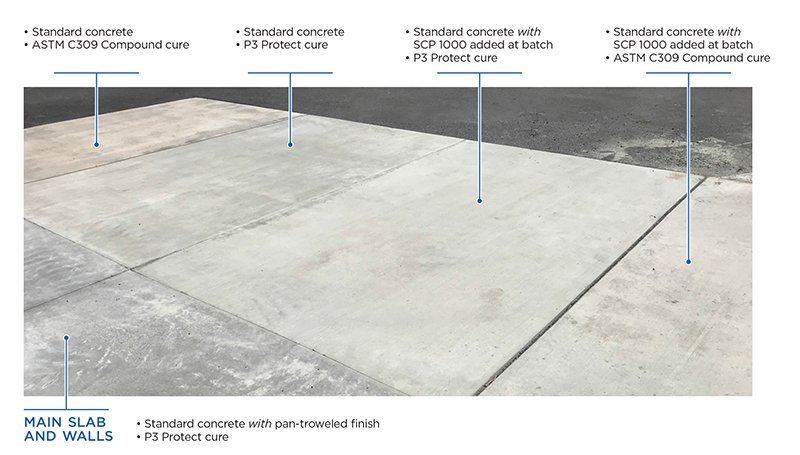